Questions have Artist reflecting on 9/11/01

I asked Freddy Freeman to produce an album for me. We had been making music together for some time and sort of clicked creatively speaking. When it comes down to it, we just had an amazing amount of fun creating tracks, arranging songs, original and cover tunes as well.

For your CD project Trouble Is…, how did you become involved with the bear community?

Well, it just so happens that Freddy Freeman is the founder of Bearapalooza, a brotherhood of   singers/songwriters and musicians that is more or less fur friendly.

The video for Bittersweet Refrain has been referred to as the "Cat" video.  Please tell us the story behind the video and about the cats.

Bittersweet Refrain evolved from a process whereby a lot of ideas had to be discarded and rethought. The cats are several artful objects that were either made by or belonged to my late mother. They really just ended up being in the video and were not meant to be the subject matter.  It became a bit of a  contest/challenge to count the cats and/or how many times cats appeared in the video, when Unashamed Faith Cafe had a trivial contest.


How many cats do you see?
Bittersweet Refrain by Charles K. Brown

It has been a real seat-of-the-pants operation.  The first video was taken from clips on the road with Bearapalooza. We took ourselves on a tour of the Northeast USA back in 2008 and had many clips of live performances of Moody Woo. This became the first video from the album. The next step was hiring a local production company in Summerville, GA.. who had not made any music videos for clients in the past.  They mainly handled weddings and school events.  I made three videos with You One Productions and one of them was nominated for Best Folk/Jazz Video in 2011 for the RightOutTv video music awards.  It did not win, but it sure made us all proud. Two videos were made by Orlando Santiago, director of the upcoming documentary BearWorld and one video was created and edited by a good friend and amazing performance artist Kendall Kelly.

What other artist have had influences on you and your music and why?

There are too many to even name, if I had to make a top ten list, these are the first names that come to mind;  The Beatles, Bob Dylan, Little Feat, the Eagles, Hank Williams, Patsy Cline, Carole King, James Taylor, Tom Waits and Stephen Foster. All of the music we grow up listening to becomes the fabric of our creative clothing. I am certainly not a genius with the metaphor here.

Tell us what you go through when you hit one of those challenging periods in making music.

Complete and utter chaos, I have gone as long as two or three years without writing a song. My original songs happen mainly when something happens to me first and I feel an overwhelming need to - let it all out.
What is next for you? 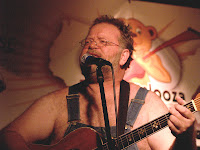 I hope to start working on a new album soon.  I have most of the songs in mind and even some of the arrangements and the players. I am doing some executive producing in the documentary world now too.


If you were not creating music, what would you be doing?

I always dreamed I would be an actor and I spent 5 years as a professional, card-carrying stage actor. I think, if I were free to do it or felt free to do it, I'd still be pursuing parts in plays.  At one time, it was my ambition to play in all the works of William Shakespeare. I let go of that dream several years ago.  I think it must take some kind of intestinal fortitude that I simply did not have to be an actor.
What would folks be surprised to find your fridge?

They would be shocked to see there was nothing in it, but some condiments, some bottled water and some cans of ginger ale for medicinal purposes.  I eat out most all the time or carryout, as the case may be.

Where can folks find your music and more about you?

The CD is available for download or for physical copies at most digital outlets, primarily at Cdbaby, Amazon and  iTunes. We started a blog for the album, but have been lax at updates. The videos for Trouble Is... can be seen on YouTube, if you search Charles K. Brown  Trouble is... It makes the world go 'round. One of them was nominated for Best Folk/Jazz Video in 2011 for the RightOutTv video music awards.  It did not win, but it sure made us all proud. Two videos were made by Orlando Santiago, director of the upcoming documentary BearWorld and one video was created and edited by a good friend and amazing performance artist Kendall Kelly.


Thank you Charles for taking the time to speak with us!
Unashamed Faith Cafe on Facebook

NAME: Arizzona, Unashamed Faith Cafe Radio Program
Radio Program & Bio...
Unashamed Faith Cafe (UFC) features the best in Spiritual and gifted artists from around the world who have united together in faith, hope and love. Her vision for UFC is to establish a viable promotional tool for Spiritual and glbt artists that allows them to broaden their outreach, and that through UFC, a universal message of acceptance, understanding, and respect is heard.

Purpose Statement of Unashamed Faith Cafe: To discover and promote Spiritual artists so the world can enjoy music and inspiration that spreads the Grace message of God's love with us all.

Mission Statement of Unashamed Faith Cafe: To have a diverse impact on our community by providing faith based programming that inspires, uplifts and encourages us all spiritually